Female foeticide is the practice of aborting a female fetus to prevent her from being born. This leads to over-fertility in males, and creates an imbalance that makes it harder for women who are able to give birth. Studies show that this new trend could lead to aggravated gender inequality around the world.

Female foeticide in India is a social and political issue. It has been a controversial topic since the 1990s, but it has become more prevalent in recent years. The Indian government believes that female foeticide is a major problem, and they are taking steps to stop it by 2020. 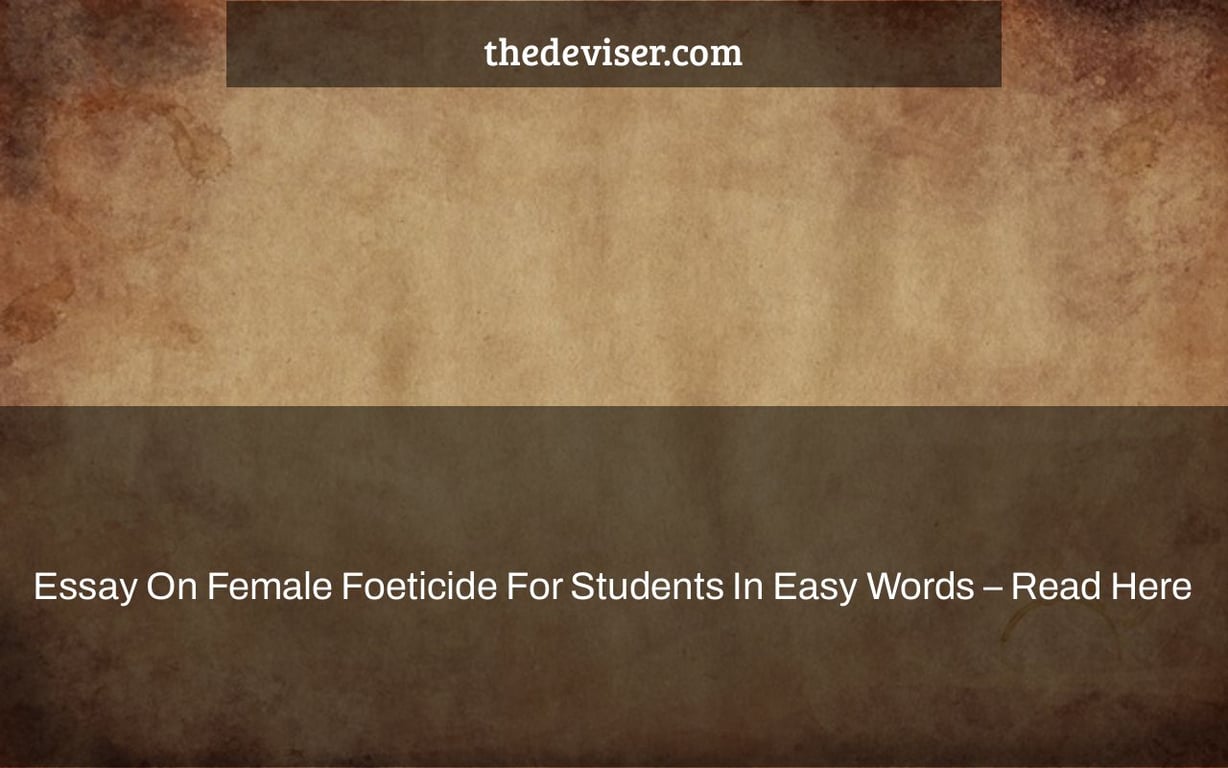 Most individuals dislike having a female as a kid, therefore when they learn that the child is a girl, they abort the pregnancy before the child is born.

There is a significant gender disparity in the birth of girls and boys because when a male kid is born, people do not abort it, but when a girl child is born, they abort the baby, and this has become a major issue of gender disparity. According to sources, there are about 940 females for every 1000 boys.

Gender disparities are a major issue in India, where many feel that a girl is a danger because of the country’s dowry system, which places a financial burden on the people. As a result, individuals are more likely to give birth to a male than a girl.

The most common cause of female foeticide is a family’s economic crisis. When a family’s finances are tight, people prefer to have a boy child because a boy child can work and provide income, whereas a girl child can’t work and must do all of the household chores, so she won’t be able to provide for her family. These beliefs lead to the girl child being aborted.

Another reason for the abortion of a girl child is that once she has been raised and is ready to marry, there is a dowry system in India, where a girl child’s family is required to give money, appliances, and other items to the boy’s family. As a result of this act, people believe that women are a burden to their families.

This legislation is mostly implemented in the northern and western parts of India, such as Rajasthan and other states, where the economy is weak and the poverty rate is high.

Because once a woman marries, she joins another family and is unable to provide for her family, while males who are reared are able to provide for their families. Girls are not provided the education they need and are constantly kept under the supervision of guys.

Changes in the Past

The Indian government has implemented many reforms in the past. Now, a boy and a girl are treated equally, with no gender distinctions.

All of the benefits that a guy receives from school have been given to girls as well, and everything has been done equally for both.

Prime Minister Narendra Modi of the Indian government has taken a major role in women’s education by organizing many camps such as Beti Bachao. He has established a fantastic initiative for female education called Beti Padhao.

In today’s India, a family celebrates the birth of a female child with great pleasure and excitement, and there are no gender distinctions between a boy and a girl, and the Indian government has done a fantastic job in achieving this equality.

Today’s women are generally on par with boys in all areas, such as technical, scientific, and business; in fact, a woman is always one step ahead of a male. Women should be treated equally to men, and gender equality should be maintained in all nations.

You may post any additional questions regarding the Essay On Female Foeticide in the comment box below.

What is female Foeticide in simple language?

A: The process of killing a female foetus.

What is the main reason of female Foeticide in India?

A: The main reason of female foeticide in India is the cultural preference for sons.

What is female Foeticide how does it affect our society?

Essay On Demonetization in India For Students – Read Here