In the offseason, the Washington Football Team must formulate a plan to build on their success and sustain it for years to come. The team has been successful over recent seasons due to its largely homegrown roster that is loaded with high-level talent in key areas such as defense, offense and special teams. However, now that they are consistently winning games every year there will be pressure from local fans and NFL peers alike for them to continue this momentum by not only improving but also maintaining core competencies so they don’t fall into complacency like most other professional sports teams do after achieving short term success.

The Washington Football Team is entering the 2022 NFL offseason with a lot of question marks. The team must have a plan of attack to make sure they are successful in the upcoming season. 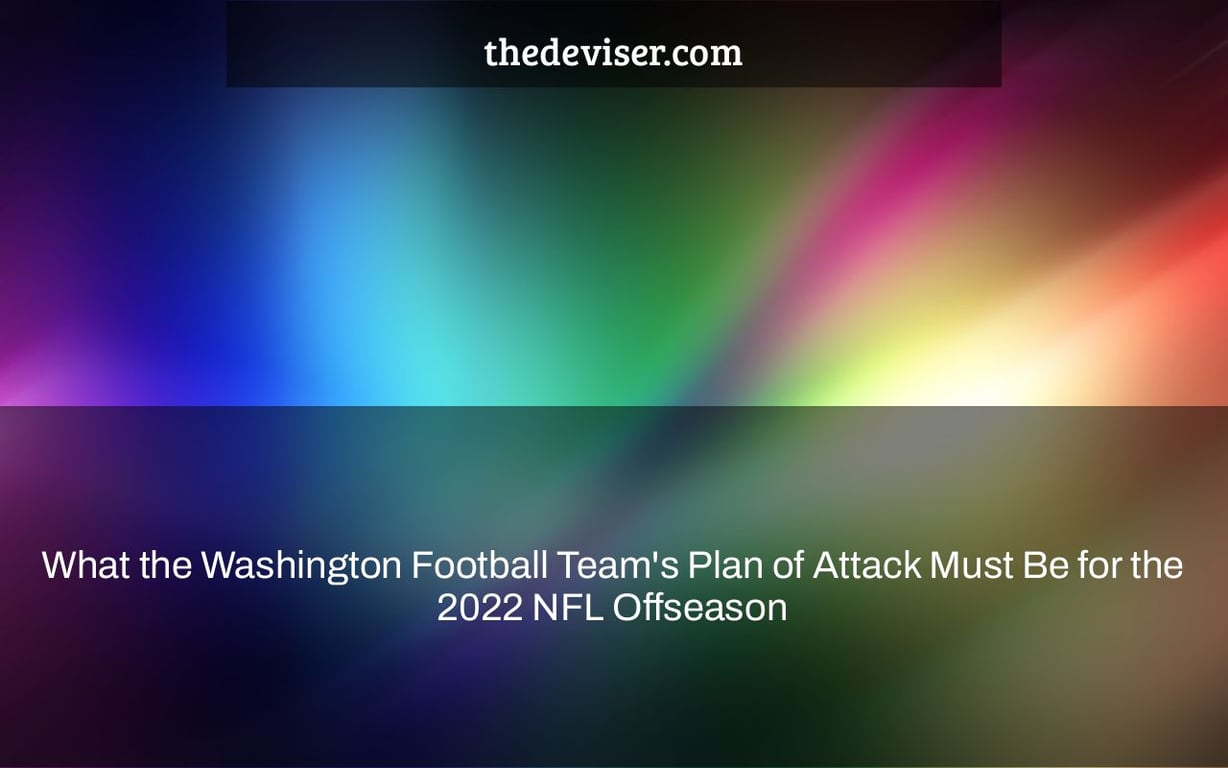 The Washington Football Team planned for an even stronger 2022 season after an improbable playoff participation the year before. Washington hoped to get to the top of the NFC East as a constant competitor with the Dallas Cowboys by focusing on Ron Rivera’s strong defensive strategy.

Unfortunately for Washington, such a scenario never played out. Washington limped its way to a losing season, the franchise’s fifth in a row as Rivera & Co. finished 7-10, good for third in the NFC East.

If the Football Team, which will, happily, be given a new name in February, is serious about returning to the playoffs in 2022, significant changes must be made. They can’t keep the same roster and expect things to improve on their own.

The most pressing offseason concerns

Washington’s most important offseason question is linked to its quarterback position, as it is with most consistently bad football teams. Ryan Fitzpatrick, who was signed in the summer, only lasted one game before suffering a season-ending injury. In Fitzpatrick’s absence, backups Taylor Heinicke and Kyle Allen were unable to lead Washington to a winning record.

Heinicke seems to have gained a lot of favor in the Washington locker room and among the fans. However, the harsh fact of the issue is that he should not be trusted to start 17 games as quarterback. He’s obviously a valuable backup to have on the roster, but his days as a long-term solution are long gone. He has a passer rating and a quarterback rating that are both below the top 20; you’ll be hard-pressed to find a club that has had substantial success with a quarterback of that caliber.

Several offseason reports linked Mac Jones to the Football Team. On draft night, though, Ron Rivera went in a different approach, investing on the defense. He’ll probably come to regret that choice, and he’ll have a chance to make amends this spring by selecting a new talented rookie quarterback.

The Football Team might potentially rummage through the market for new players. Baker Mayfield, the starting quarterback for the Cleveland Browns, might be traded shortly. In comparison to Heinicke, he’s a big improvement.

The most important free-agency choices

Washington has a lieutenant governor. This will enable Sam Cosmi, a 2021 second-round selection, to remain at right tackle.

TG Brandon Scherff is Washington’s sole offensive line starter who will be a free agent following this season. https://t.co/S3jphvNrBq

Washington doesn’t have a lot of pending free agents to deal with, which is usually excellent news for a club that has to reshape its squad. Starting right guard Brandon Scherff, on the other hand, is about to leave town, and the Football Team would be prudent to offer him a substantial quantity of money to keep him in town.

For numerous seasons, Scherff has been the top offensive tackle on the Football Team. He’s now on a $18 million franchise tag, which shows how highly Washington regards his talents.

In the NFL, offensive line talent is in short supply. Scherff’s departure would be a major blow to a Washington offensive line that has just lately begun to find its stride in terms of output. Ron Rivera should have no problem providing his starting RG a multi-year contract this spring.

Fitzpatrick, who has already been named, should be fired without hesitation. Regrettably, the signing did not go as planned. But, well, that’s life in the NFL.

J.D. McKissic, a running back, is the last pending free agent worth noting. He’s been a competent backup to Antonio Gibson and is deserving of a minor contract extension.

Needs and probable targets for the NFL Draft in 2022

When asked whether the middle linebacker position is still in Jamin Davis’ long-term plans beyond this season, Ron Rivera said, “I think that’s something we really have to look at.”

The Football Team only has three first-round selections in the 2022 NFL Draft, which isn’t ideal given the current status of the squad. Rebuilding clubs usually want four to six top-100 choices.

In any case, Washington will have a top-10 choice in the draft this spring, putting them in a good position to find a new franchise quarterback. Kenny Pickett, Malik Wills, Sam Howell, and Matt Corral are all strong prospects who might step in as Washington’s starting quarterback right away.

After the quarterback discussion is settled, the Football Team should focus on linebacker, safety, and wide receiver. Linebacker Jamin Davis, the team’s first-round choice last year, is coming off a concerningly bad rookie season, prompting speculation that Ron Rivera is seeking to replace him entirely this summer. The club hasn’t named a starter at free safety for the 2022 season, so Rivera may attempt to replace that spot early in the draft.

Last but not least, Washington might use another offensive weapon in addition to Terry McLaurin. Due to injuries, Washington’s recent Curtis Samuel deal was a disappointment, and the team shouldn’t count on his returning to full strength next season. The worst thing a football team can do to a rookie quarterback is not provide him with adequate weapons at wide out.

In 2022, one player on either side of the ball must step up.

Curtis Samuel has completed his year’s work. He has 10 carries for 38 yards in the 2021 season. During an injury-plagued season, he only appeared in five games.

When it comes to Curtis Samuel, Washington is counting on him to make a comeback in 2022. Last summer, they signed him as a genuine WR2, but he failed to live up to expectations in his first season in the D.C. region. In 2020, he was a very versatile weapon for the Carolina Panthers. Next season, the Football Team relies on him to reclaim his previous form.

The Washington Football Team could need a better 2022 from fan favorite defensive end Chase Young on the defensive side of the ball (believe it or not). Young has just 1.5 sacks in nine games before suffering a season-ending knee injury. That’s poor performance from a player dubbed a “generational talent” just out of college.

Young’s knee rehab merely adds to the situation’s stress. He has to find a method to improve his performance next season while still getting healthy.

The “washington football team name” is a question that has been asked many times before. The Washington Football Team must have a plan of attack for the 2022 NFL Offseason.